I refer to the opinion of Germaine Greer:

If you haven’t read Proust, don’t worry. This lacuna in your cultural development you do not need to fill. On the other hand, if you have read all of A la Recherche du Temps Perdu, you should be very worried about yourself. As Proust very well knew, reading his work for as long as it takes is temps perdu, time wasted, time that would be better spent visiting a demented relative, meditating, walking the dog or learning ancient Greek.

In Search of Lost Time, or Remembrance of Things Past, as Proust’s "novel" is variously titled in English, is widely touted as one of the favourite books of the 20th century, second only to The Lord of the Rings. Fans of Tolkien can certainly handle a marathon read, as can Harry Potter addicts; but whether they have stayed the distance with Proust seems to me highly doubtful.

But I have to confess getting into my seventieth year now while remaining to this point a Proust Virgin! Thanks to eBooks (Adelaide University) I now have the whole thing – free — on computer and Kobo. Yesterday I took the plunge. 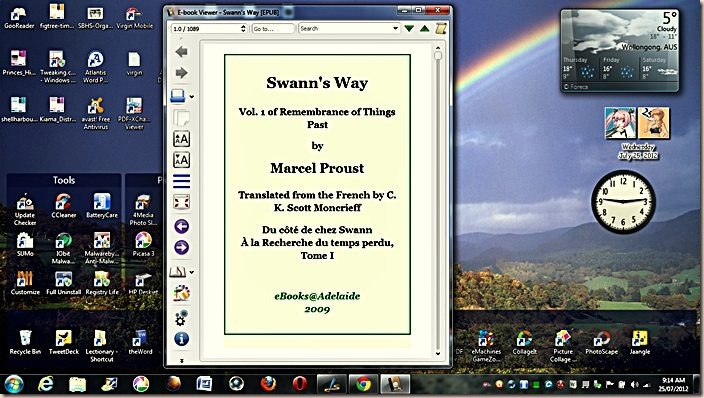 I feel that there is much to be said for the Celtic belief that the souls of those whom we have lost are held captive in some inferior being, in an animal, in a plant, in some inanimate object, and so effectively lost to us until the day (which to many never comes) when we happen to pass by the tree or to obtain possession of the object which forms their prison. Then they start and tremble, they call us by our name, and as soon as we have recognised their voice the spell is broken. We have delivered them: they have overcome death and return to share our life.

And so it is with our own past. It is a labour in vain to attempt to recapture it: all the efforts of our intellect must prove futile. The past is hidden somewhere outside the realm, beyond the reach of intellect, in some material object (in the sensation which that material object will give us) which we do not suspect. And as for that object, it depends on chance whether we come upon it or not before we ourselves must die.

Many years had elapsed during which nothing of Combray, save what was comprised in the theatre and the drama of my going to bed there, had any existence for me, when one day in winter, as I came home, my mother, seeing that I was cold, offered me some tea, a thing I did not ordinarily take. I declined at first, and then, for no particular reason, changed my mind. She sent out for one of those short, plump little cakes called ‘petites madeleines,’ which look as though they had been moulded in the fluted scallop of a pilgrim’s shell. And soon, mechanically, weary after a dull day with the prospect of a depressing morrow, I raised to my lips a spoonful of the tea in which I had soaked a morsel of the cake. No sooner had the warm liquid, and the crumbs with it, touched my palate than a shudder ran through my whole body, and I stopped, intent upon the extraordinary changes that were taking place. An exquisite pleasure had invaded my senses, but individual, detached, with no suggestion of its origin. And at once the vicissitudes of life had become indifferent to me, its disasters innocuous, its brevity illusory — this new sensation having had on me the effect which love has of filling me with a precious essence; or rather this essence was not in me, it was myself. I had ceased now to feel mediocre, accidental, mortal. Whence could it have come to me, this all-powerful joy? I was conscious that it was connected with the taste of tea and cake, but that it infinitely transcended those savours, could not, indeed, be of the same nature as theirs. Whence did it come? What did it signify? How could I seize upon and define it?

I think I am hooked. And one virtue, for me, of the eReader is that the Himalayas I am now ascending seem less daunting somehow screen by screen. Why, I am 20% through Swann’s Way already!

And even if the interviewer seems to be stoned:

There is a very handy cheat page in Wikipedia.

In Search of Lost Time is considered the definitive modern novel by many scholars. It has had a profound effect on subsequent writers such as the Bloomsbury Group. "Oh if I could write like that!" marveled Virginia Woolf in 1922…

Literary critic Harold Bloom wrote that In Search of Lost Time is now "widely recognized as the major novel of the twentieth century."  Vladimir Nabokov, in a 1965 interview, named the greatest prose works of the 20th century as, in order, "Joyce’s Ulysses, Kafka’s The Metamorphosis, Biely‘s Petersburg, and the first half of Proust’s fairy tale In Search of Lost Time." J. Peder Zane’s book The Top Ten: Writers Pick Their Favorite Books, collates 125 "top 10 greatest books of all time" lists by prominent living writers; In Search of Lost Time places eighth. In the 1960s, Swedish literary critic Bengt Holmqvist dubbed the novel "at once the last great classic of French epic prose tradition and the towering precursor of the ‘nouveau roman’", indicating the sixties vogue of new, experimental French prose but also, by extension, other post-war attempts to fuse different planes of location, temporality and fragmented consciousness within the same novel. Pulitzer Prize-winning author Michael Chabon has called it his favorite book.

Proust’s influence (in parody) is seen in Evelyn Waugh‘s A Handful of Dust (1934), in which Chapter 1 is entitled "Du Côté de Chez Beaver" and Chapter 6 "Du Côté de Chez Tod." Waugh did not like Proust: in letters to Nancy Mitford in 1948, he wrote, "I am reading Proust for the first time …and am surprised to find him a mental defective" and later, "I still think [Proust] insane…the structure must be sane & that is raving.")

Since the publication in 1992 of a revised English translation by The Modern Library, based on a new definitive French edition (1987–89), interest in Proust’s novel in the English-speaking world has increased. Two substantial new biographies have appeared in English, by Edmund White and William C. Carter, and at least two books about the experience of reading Proust have appeared by Alain de Botton and Phyllis Rose…