Well, they have certainly increased since then! See this story, and some excellent pictures, in The Illawarra Mercury.

A flourishing colony of flying foxes at Figtree is driving some businesses and residents batty. It is estimated that tens of thousands of grey-headed flying foxes have turned a patch of bushland just north of the freeway exit into their summer home.

"The smell is overwhelming and they gather at dusk in numbers that completely blacken the sky overhead," said Chris Caroutas from Figtree Cellars.

WIRES bat co-ordinator Sandra Leonard has called for patience, assuring people the flying foxes are crucial to forest regeneration and will move on once the bush food runs out.

But Mr Caroutas said numbers had been steadily increasing each year and so had the stench. "Customers are constantly commenting on the smell, which is not good if that’s the first thing they notice when they get out of their cars," he said.

It has been likened to cat urine, marijuana and lantana.

Hakan Karama from Star Kebab House described the bats as "annoying and smelly". "Customers are always complaining and it seems worse when it rains," he said.

Juliette Fox, an assistant at Pet Barn, said the squealing and flapping did not bother her. "Their numbers have definitely increased but that’s probably because they have been displaced from their natural habitat," she said.

Since I was going shopping at Figtree yesterday I thought I would call in on the bats as I walked by. And the numbers are indeed amazing, something my camera could not really capture. 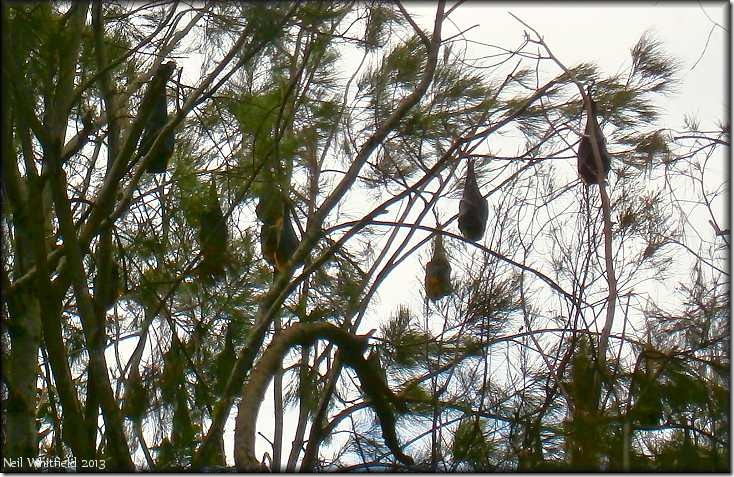 Australian poet Les Murray wrote a wonderful poem “The Flying Fox Dreaming” – “finger-winged night workers… Upside down all their days…” They are a significant element in Indigenous culture also, as in this painting by Jimmy Djilminy (2000).

See also a site of questionable authenticity — but nonetheless it may please some – an attempt to do a tarot on indigenous symbols. Very New Age. There is a lot of that around. Nice art work though.

Who remembers the disgraceful Marlo Morgan and her bullshit exploiting Aboriginal Culture?

1996: Dr. John Stanton (Berndt Museum of Anthropology, WA) “said the book contained misleading and damaging information about Aboriginal people” [5]. He was not sure, he said, “whether the damage the book had done to the overseas image of Aboriginal culture, which was complex, diverse and vibrant, could be ever undone.” Morgan promised a written apology, which she actually never produced [6].

Not saying that Wildspeak site is totally doing a “Mutant Messages Down Under” shtick – but one does need to question such things.

This, however, is authentic:

Oh, and after photographing the bats I called in at The Hellenic Club and…