There really have been so many things I have seen or read in the past few days that deserve to be shared, that have provoked more reflection than I can possibly capture in one blog post or even two. To continue…

Sunday and Monday we had the two compelling episodes of Devil’s Dust.

An intensely personal drama based on one of Australia’s most shocking corporate scandals, Devil’s Dust tells the story of ordinary Australians caught in a web of deception in the James Hardie asbestos saga.

The two-part series follows four people – led by everyday hero and ex-Hardie’s employee Bernie Banton (Anthony Hayes) – thrown together by a tragedy that becomes a high-stakes battle through the corridors of corporate, political and media power.

Spanning four decades, Devil’s Dust shows industrial manufacturer James Hardie first cover up its knowledge of the dangers of its asbestos mining and products and then threaten compensation plans by moving the company overseas.

But it is not just a story of court cases and corporate legalese. Devil’s Dust depicts Australians from all walks of life whose lives are ripped apart by a deadly dust that looks so innocent, yet is so lethal.

In the 1970s, Bernie Banton works on the James Hardie BI factory floor in Parramatta where asbestos dust is piled like snowdrifts. Little does he realise the impact the dust will have on him, his family and his colleagues – and that he will inspire a nation with his determination to hold his former employer to account.

Young and tenacious ABC journalist Matt Peacock (Ewen Leslie) uncovers the dramatic gap between the dangers of asbestos known to international scientists and the public position of James Hardie and its allies.

When Matt meets Bernie during an interview for The 7.30 Report he anoints him the unofficial spokesperson for the asbestos compensation campaign. As the two become fixated on pursuing James Hardie, it’s up to Bernie’s wife, Karen (Alexandra Schepisi), to pick up the pieces at home. Karen helps Bernie handle the emotional burden of fighting for victims of asbestosis and mesothelioma, the cancer caused by asbestos – and to face his own asbestos fate.

The fictional character of James Hardie spin doctor Adam Bourke (Don Hany) is Matt and Bernie’s nemesis, as he works hard to protect the interests of the company’s shareholders. But far from being ruthless and uncaring, Adam experiences terrible moral dilemmas when he realises that the health and survival of thousands of Australians is jeopardised by the materials his company manufactured.

Based on interviews with those who have survived and the stories of those who have died, Devil’s Dust is inspired by the work of Matt Peacock, author of the book Killer Company.

The legacy of asbestos will continue for decades to come. By 2030, asbestos-related illnesses are expected to have killed more than 60,000 Australians, more than our country’s death toll in WW1.

Remember one of Tony Abbott’s less noble moments, from 2007?

That the events depicted dramatically but essentially truthfully in Devil’s Dust should serve to destroy any naive belief in the intrinsic goodness of capitalists, entrepreneurs  and markets is so obvious as to be hardly worth saying, and on an even greater scale consider the book I am now reading: Inside Job: The Financiers Who Pulled Off the Heist of the Century, by Charles Ferguson, Oneworld 2012. Thanks, Wollongong Library.

Charles Ferguson’s Inside Job, winner of the 2011 Academy Award for best documentary feature, is essential viewing for anyone who wants to understand the causes of the financial crisis. Although narrator Matt Damon brought Hollywood glitz, the film’s stars were the bankers, regulators and academics interviewed by Ferguson. The director’s gentle interrogation and good humour coaxed his subjects into attempting to explain their actions. Most failed. Like all good political documentaries, it informed and infuriated, while the creator remained in the background….

So begins a rather critical review in The Financial Times, linked to the book title above. As for me, I am thus far drawn in and impressed by Ferguson’s narrative, and by his anger which strikes me as well justified and rooted rather firmly in facts. 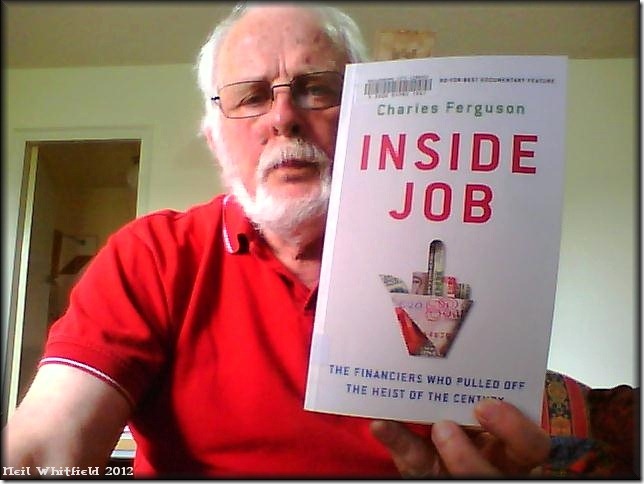 …The Obama government has rationalised its failure to prosecute anyone (literally, anyone at all) for bubble-related crimes by saying that while much of Wall Street’s behaviour was unwise or unethical, it wasn’t illegal. With apologies for my vulgarity, this is complete horseshit.

When the government is really serious about something – preventing another 9/11, or pursuing major organised crime figures – it has many tools at its disposal and often uses them. There are wiretaps and electronic eavesdropping. There are undercover agents who pretend to be criminals in order to entrap their targets. There are National Security Letters, an aggressive form of administrative subpoena that allows US authorities to secretly obtain almost any electronic record – complete with a gag order making it illegal for the target of the subpoena to tell anyone about it. There are special prosecutors, task forces and grand juries. When Patty Hearst was kidnapped in 1974, the FBI assigned hundreds of agents to the case.

In organised crime investigations, the FBI and government prosecutors often start at the bottom in order to get to the top. They use the well-established technique of nailing lower-level people and then offering them a deal if they inform on and/or testify about their superiors – whereupon the FBI nails their superiors, and does the same thing to them, until climbing to the top of the tree. There is also the technique of nailing people for what can be proven against them, even if it’s not the main offence. Al Capone was never convicted of bootlegging, large-scale corruption or murder; he was convicted of tax evasion.

Let’s take the example of securities fraud. Where to begin?…