Don’t know them, but they are Aussies…

But this guy elevated the belly button to cosmic heights… 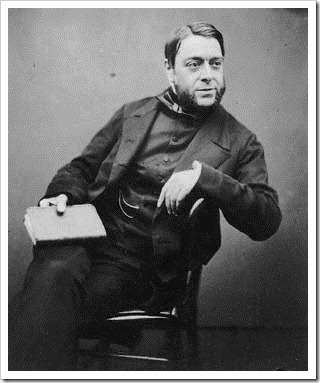 Wikipedia: “Philip Henry Gosse (6 April 1810 – 23 August 1888) was an English naturalist and popularizer of natural science, virtually the inventor of the seawater aquarium, and a painstaking innovator in the study of marine biology. Gosse is perhaps best known today as the author of Omphalos, an attempt to reconcile the immense geological ages presupposed by Charles Lyell with the biblical account of creation.

After his death, Gosse was portrayed as a despotic and fanatically religious father in Father and Son (1907), the literary masterpiece of his son, poet and critic Edmund Gosse"

The gist of the Omphalos theory is that just as Adam. though not “born”, would have had a false history stamped on him via his belly button – think about it – so the fossil record etc represents a false history preloaded, as we might say today, by God at the time of creation. Ingenious, except that there is nothing to say the false history began two seconds ago and this entry was preloaded by God….

At the moment I am reading Father and Son. Just how true it is people have disputed, but whatever the case the book is a real treasure. Thanks to Project Gutenberg and my Kobo.

Meanwhile, capable as I was of reading, I found my greatest pleasure in the pages of books. The range of these was limited, for story-books of every description were sternly excluded. No fiction of any kind, religious or secular, was admitted into the house. In this it was to my Mother, not to my Father, that the prohibition was due. She had a remarkable, I confess to me still somewhat unaccountable impression that to ‘tell a story’, that is, to compose fictitious narrative of any kind, was a sin. She carried this conviction to extreme lengths. My Father, in later years, gave me some interesting examples of her firmness. As a young man in America, he had been deeply impressed by ‘Salathiel’, a pious prose romance by that then popular writer, the Rev. George Croly. When he first met my Mother, he recommended it to her, but she would not consent to open it. Nor would she read the chivalrous tales in verse of Sir Walter Scott, obstinately alleging that they were not ‘true’. She would read none but lyrical and subjective poetry. Her secret diary reveals the history of this singular aversion to the fictitious, although it cannot be said to explain the cause of it. As a child, however, she had possessed a passion for making up stories, and so considerable a skill in it that she was constantly being begged to indulge others with its exercise. But I will, on so curious a point, leave her to speak for herself:

‘When I was a very little child, I used to amuse myself and my brothers with inventing stories, such as I read. Having, as I suppose, naturally a restless mind and busy imagination, this soon became the chief pleasure of my life. Unfortunately, my brothers were always fond of encouraging this propensity, and I found in Taylor, my maid, a still greater tempter. I had not known there was any harm in it, until Miss Shore [a Calvinist governess], finding it out, lectured me severely, and told me it was wicked. From that time forth I considered that to invent a story of any kind was a sin. But the desire to do so was too deeply rooted in my affections to be resisted in my own strength [she was at that time nine years of age], and unfortunately I knew neither my corruption nor my weakness, nor did I know where to gain strength. The longing to invent stories grew with violence; everything I heard or read became food for my distemper. The simplicity of truth was not sufficient for me; I must needs embroider imagination upon it, and the folly, vanity and wickedness which disgraced my heart are more than I am able to express. Even now [at the age of twenty-nine], tho’ watched, prayed and striven against, this is still the sin that most easily besets me. It has hindered my prayers and prevented my improvement, and therefore, has humbled me very much.’

This is, surely, a very painful instance of the repression of an instinct. There seems to have been, in this case, a vocation such as is rarely heard, and still less often wilfully disregarded and silenced. Was my Mother intended by nature to be a novelist? I have often thought so, and her talents and vigour of purpose, directed along the line which was ready to form ‘the chief pleasure of her life’, could hardly have failed to conduct her to great success. She was a little younger than Bulwer Lytton, a little older than Mrs. Gaskell—but these are vain and trivial speculations!