Down to the doctors. Aside from rotten teeth – waiting on dealing with them – and sore heel, and of course the heart, and other signs of decay, it turns out I am fine. A blood test I had on Monday indicated alcohol consumption. I wondered how that could be – though I do drink wine moderately. But then I remembered I had the blood test the day after the last “pub crawl” with Sirdan – well two pubs – before he went to Queensland.

Then the Library. I have a lot of good books to tell you about shortly, and borrowed more today. I am especially attracted at the moment to 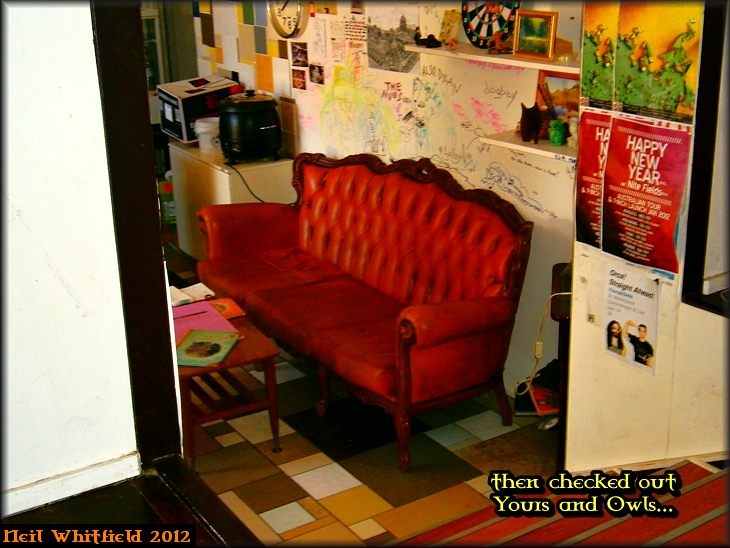 You may notice I never use natural colouring for Yours and Owls. Heightening it is more truthful.

I was simply checking the internet for Dr Cassy’s current number – it isn’t there – when I came upon this: “Don’t Leave Me This Way” (from String Quartet).

lylechan.com is a radical experiment in truth-telling. Every week over the next 28 months, I will write approximately 6 minutes of music per fortnight and give it away for free. I will accompany the music with blogposts which say what was on my mind and was occurring in my life during the composition of this music.

I found the music beautiful, and then I read on encountering things I had been on the edges of myself, Dr Cassy having been my doctor on and off for about 25 years.

I began the sketches for this section of my String Quartet back sometime in the mid-1990s.

On May 29, 1995 I delivered the eulogy below for the artist David McDiarmid. David was a magical and gifted artist, completely of his time in the best sense of that phrase – the time being the late 70’s to the mid 90’s, against the growing backdrop of the AIDS epidemic…

We were all AIDS activists back then. I was a member of ACT UP, the media-savvy direct-action group destined for perpetual infamy on account of its confronting protests. (Think Greenpeace, but for AIDS.) Within a couple of months of arriving in Australia in Christmas 1990, I was running a ‘buyers club’ importing AIDS drugs unavailable here. It was a stop-gap measure while the activists lobbied hard to get regulatory authorities and pharmaceutical companies to cut the red tape preventing the drugs from being accessible readily and affordably….

David and I became much closer after I started collaborating with a doctor named Cassy Workman. Cassy and I together with Lois Johnson from ACT UP formed a radical AIDS treatment center masquerading as an ordinary doctor’s office. We ran our own clinical trials, recorded and analyzed our own data, and devised treatment regimes using drug combinations obtained by lying to the hospitals about what drugs our patients were really on – to circumvent a thinking-inside-the-box limit about how many experimental therapies a person could be on simultaneously. Our patients were clearly healthier than most. Some of it was due to the stealth combination therapy. Most of it was because we treated AIDS patients like normal people…

I’ll cut to the eulogy here, because much of the rest of David’s story is told in it, and resume my story about the music afterwards…

During those heady days of life-and-death activism, I sketched a lot of music without fully composing much of it. I used to joke that I specialized in unfinished works. I’ve since realized that sketching was my way of keeping a diary. A diary of feelings, rather than events. This piece is realized from sketches I made from that time.

Since Cassy uncompromisingly gave her everything to every patient in front of her in every moment, it meant unpredictably long periods of waiting in the doctor’s office. A big part of my friendship with David came from talking to him while he waited his turn to see Cassy. He’d come with hilarious gifts for me, such as a compilation video tape of cartoons (eg. Son of Stimpy) and 1950s bodybuilding and soft porn footage. He also gave me a compilation cassette tape of campy songs, which I eventually understood was either a prototype or an offshoot of his “Toxic Queen presents …” and “Funeral Hits of the 90s” projects.

Humor – actually, sarcasm and bitchiness – was a key ingredient in David’s art. His works had titles like “Lifetimes are not what they used to be”, “Darling, you make me sick”, “AIDS victim dies alone – family profits” and “It’s my party and I’ll die if I want to, sugar.”…

My music here is nothing like David’s art. None of David’s humor has shown up. So that’s how I know this piece is not a tribute to him, though he’s in it. It’s more a record of the times we both inhabited, and about the stars we visited in our minds while we were all coping with the times. Instead there’s a debonairness to the music, a sophistication that’s shown up as, interestingly, jazz. I don’t know if David liked jazz, but this piece has great chunks of it. David lived a lush life. I think that’s where the jazz comes from, from Billy Strayhorn and the lush life….

In 2012, I am sending out free music from my gigantic, autobiographical work-in-progress called Solo Piano.

I guarantee it will be one of the most unusual musical projects you’ve ever come across. More information will be posted on this website over the next few days, but meanwhile: free free to join the mailing list for Solo Piano here.

Yes, I am still ruminating, especially after seeing Meryl Streep last night on ABC. Interesting contrast made between what the USA thinks is “conservative” and the actual beliefs and actions of Maggie T.

Then I see I was not alone when I thought: " whatever I may have thought about Margaret Thatcher was kind of beside the point. Think King Lear, perhaps, with Maggie as Lear rather than as Goneril and Dennis perhaps The Fool…" Or maybe Kent?  Hmmm. But Poor Tom? Hmmm.

The film has been accused of disrespect, hagiography, clumsiness, obtuseness, ”horrifying” sexism and – by America’s National Public Radio, no less – ”sheer awfulness”. Some are charmed, others disgusted – largely along tired ideological lines.

Yet to me it seems at once a clear-eyed feminist treatise, a sympathetic study of ageing and dementia and a thoughtful analysis of mother-daughter complexities. On a canvas of riotous democracy, it cartoons the contemporary human condition, and in particular the contemporary female condition…

The Iron Lady is not told linearly, partly because we are assumed to know the narrative arc, and partly because fragmentation is the theme, common to democracy, post-modernism and Alzheimer’s disease.

Yet it is a Lear. Carol of course is Cordelia, faithfully serving the parental monarch even as she is unwittingly lashed. Mark is the perfidious Goneril, calling from South Africa only to turn the knife. Dennis is Poor Tom – equal parts priest, shrink, joker and crutch – and Airey Neave is Gloucester, car-bombed, rather than eye-gouged, for his loyalty.

Enthroned at the centre of it all is Thatcher herself; grand, as well as grandly flawed. (The film pointedly ends with her self-sketched fate, not dead but – worse – softened by disease, washing said teacup). She stands on principle, and on principle she falls.