Here is the photo blog image of June: 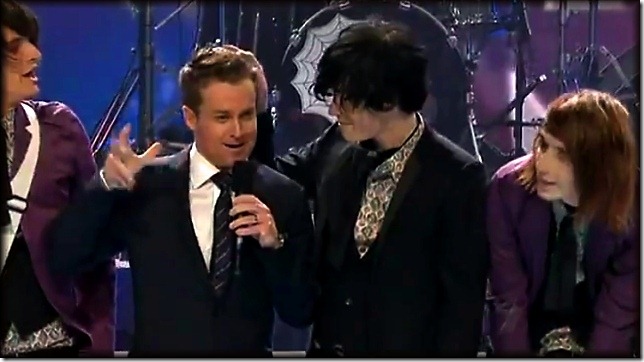 Now we all — me included — should be watching SBS for the next three nights from 8.30.

In one of the most ambitious documentary series ever made, Go Back To Where You Came From brings the hottest debate in Australia from the front page of the newspaper into living rooms around the country. Six Australians, who agree to challenge their preconceived notions about refugees and asylum seekers, go on a confronting 25-day journey tracing in reverse the journeys that real refugees have taken to reach Australia…

You see it overlaps with the last half hour of Australia’s Got Talent!…

So tonight I will be torn at 8.30. No risk about 9.00 onwards though and Wed and Thu! That SBS doco is possibly the most important TV so far this year and very likely the best. Of course one can always see it online…

It was indeed the most important TV of 2011, in my opinion. Still, on 8 June I expressed other priorities and did stay true to them. 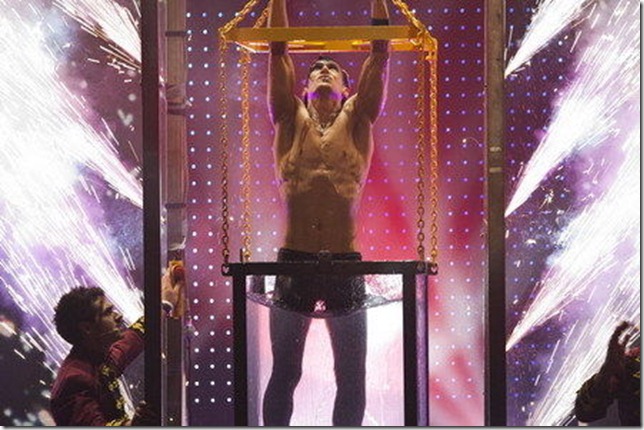 3 June was a busy morning at the Yum Yum Cafe in West Wollongong.

I was more intellectual the following day with An excellent article–“The Professors, The Press, The Think Tanks—And Their Problems” and Virtual travel in depth.

That’s, for me, one of the characteristics of first-rate genre fiction, especially in the thriller and crime genres. And some are superb in this regard.

Second to none is Qiu Xiaolong. 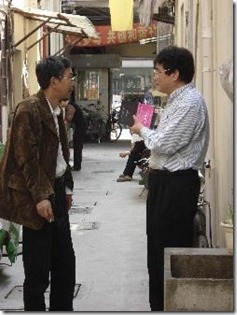 Qiu Xiaolong [on the right] was born in Shanghai, China. He is the author of the award-winning Inspector Chen series of mystery novels, Death of a Red Heroine (2000), A Loyal Character Dancer (2002),When Red Is Black (2004), A Case of Two Cities(2006), Red Mandarin Dress(2007), and The Mao Case (2009). He is also the author of two books of poetry translations, Treasury of Chinese Love Poems(2003) and Evoking T’ang (2007), and his own poetry collection, Lines Around China (2003). Qiu’s books have sold over a million copies and have been published in twenty languages. He currently lives in St. Louis with his wife and daughter.

I enthused about Death of a Red Heroine in October 2006.

Death of a Red Heroine resonates with me, because this is M’s city, and much of the novel is in the precise time and place when M knew Shanghai best; it also happens that one of M’s closest friends was a policeman in Shanghai, and thereby hangs an interesting tale indeed. Suffice to say I will probably pass the book on to M when I have finished it; I am sure he will recognise something on almost every page. M’s sister also happens to be a journalist/literary critic, as is one of the principal female characters in the novel.

If you want an authentic feel for what it is like living in China, and how the locals negotiate the politics and the system, and you want something that goes way beyond stereotypes, then read this book.

A Case of Two Cities is just as good.

5 June found me at the Steelers Club and then at Five Islands Brewery. There was a music festival happening that weekend.

Passed the 100 days/5,000 cigarettes milestone on 7 June and also posted On not being bothered….

say “apparently” because I couldn’t be bothered watching…

I’m up to here with politics as a policy-free zone, with point-scoring, with the whole shit-bag.

Julia is a dud who has allowed herself to be sandbagged over refugees producing a situation where Tony Abbott is now looking more humane than Labor! Bloody hopeless. But this is what happens when you no longer have principles.

The Greens on the other hand can be puritanical fuckwits who thereby wrecked the one chance we had to have a sensible carbon pricing regime in place. It would be up and running right now if it were not for The Greens!

The Abbott mob are just unspeakable…

See Ben Eltham on Matilda.com: Moral Failure The Crux Of This Policy Mess.

As usual, Labor is in another mess of its own making on asylum seeker policy. It’s a measure of just how poorly this government manages issues like this that Tony Abbott and even some refugee advocates started to argue this week that re-opening the old detention centre on Nauru would be more humane (that word again). Christian Kerr was spot on last night, speaking with the ABC’s Mark Colvin when he argued that Labor had effectively “wedged itself” on the issue…

Labor’s struggles over refugee policy are entirely the result of its own moral failings. One response to the problem of seaborne asylum seekers would be to end mandatory detention and to implement onshore processing rapidly, fairly and efficiently. Instead, Labor has tried a series of policies which it has hoped will allow it to appear tough on border protection while somehow still meeting Australia’s obligations under international law. None have worked, because none have addressed the fundamental causes of Labor’s political problem: the mismatch between the evidence of small and manageable asylum seeker arrivals, and hostile public opinion egged on by irresponsible media outlets and opportunistic conservative politicians…

9 June has the daily conference with the wee folk down bottom of the garden. I may let you find out for yourself what that was about… Next day Eee by gum, is that Our Tony down pit, ma? noted a habot which became more annoying as the year went on – pollies, especially Abbott, masquerading as just about everything from undertakers to sewerage workers to get a 30 second media grab. Then in I watch, they work…  I reported on progress on the building next door to The Bates Motel.

I had a Queen’s Birthday Sunday lunch at Diggers on 12 June, but also posted GetUp Australia–campaigns, petitions, activism which attracted some interest. Next day I mentioned A must-see if you treasure clear thinking….

Definitely a must see still!

14 June was marked by sadness: Passing of a person of faith – Trevor Davies from South Sydney Uniting Church and the South Sydney Herald. See also Trevor–1956-2011 and Just a modest tribute for Trevor.

On 17 June I posted My Scottish DNA, a review:

Andrew O’Hagan was at the Perth Literary Festival this year. His closing talk is on SlowTV. He can be very funny, but is also very serious about the power of literature – quite old-fashioned in that respect and I for one found this refreshing. He is also a great reader aloud – especially of Burns:

A prince can mak a belted knight,
A marquis, duke, an’ a’ that;
But an honest man’s abon his might,
Gude faith, he maunna fa’ that!
For a’ that, an’ a’ that,
Their dignities an’ a’ that;
The pith o’ sense, an’ pride o’ worth,
Are higher rank than a’ that.

Text from Burns Country to which glossary links lead. “Gree” they don’t explain. It means “prize”.

Our friend Trevor Davies would like that – even if it isn’t Welsh!

That Sunday To Sydney today–South Sydney Uniting Church, then Sunday lunch. I reported on that Sunday in Yesterday was an emotional day. I also took time to share some resources on that twit Monckton.

22 June was a significant post: Pub talk, reality TV, reality and “Go Back to Where You Came From”

Last night’s premiere of ‘Go Back to Where You Came From’ did in one night what television news and current affairs has failed to do in a decade, writes former Dateline EP Mike Carey

So reality television has finally embraced reality. ‘Go Back to Where You Came From’ on SBS TV last night was a refreshing look at the refugee debate in Australia. In the first episode of three on consecutive nights, it smashed a few stereotypes and undermined a shibboleth or two without preaching once.

It allowed ordinary Australians to imagine what it’s like to be an asylum seeker. Until last night’s ‘Go Back’ have any programs given viewers the opportunity to walk in a refugee’s shoes or literally sleep on an asylum seeker’s leaky boat? I can’t remember many, perhaps a couple of Four Corners stories using amateur or surveillance footage of the horrors of incarceration.

I know of a Dateline story or two…

…the mainstream’s failure to do in years what ‘Go Back’ did in one night. I don’t believe reality TV is implicitly better at telling these stories — it’s not — but mainstream television current affairs has been captured and tied down with editorial rules by producers who are too afraid to challenge the system.

In ‘Go Back to Where You Came From’, the asylum seeker story is creatively told in the abstract using all the devices of Master Chef. It’s a fantastic concept, but also an indictment of mainstream news and current affairs…

See also About last night’s “Send them back…” and Paul Sheehan.

Coffee in The Gong on 25 June is a celebration. 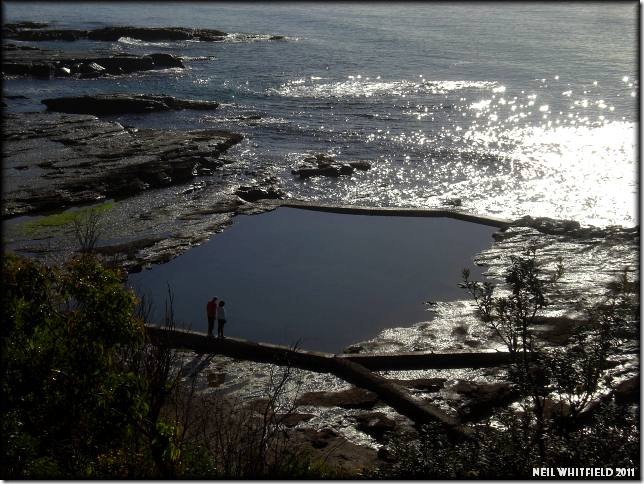 I wrote about blogging next: I am not a party, an institution, a guru or an oracle: just one old guy in Wollongong–that’s all. That is still the case.

I pissed off a few readers with my reaction to Q&A on the last Monday in June: “Oh my God. I watched Q&A last night. All this seems to do these days is confirm my disrespect for our supposed leaders who again manifestly argued ferociously for positions they equally manifestly didn’t believe in. Adam Bandt may be an exception – but the Greens couldn’t run a chook raffle, let alone a country…” I still think so.

Stats about this blog–June 2011 and Stats to kingdom come finished off the month. The last one isn’t what you may think:

Earlier this week I was fascinated by Arabic-speaking children have the smarts but shun selective system in the Sydney Morning Herald. Having been the ESL teacher at a selective school, and acknowledging Arabic speakers there were thin on the ground back ten years ago, I was less interested in accounting for that than in the stats that were published with the article…