OneSteel manufacturers long products, BlueScope manufacturers flat products. The OneSteel sourced product in the stadium would be structural products (beams, etc) that are not produced by BlueScope.

you people are funny.

When I look at what I’m wearing, in don’t see any Australian made product. Most of the cars on our roads are foreign,

80 percent of our mining companies are foreign owned, our agricultural land is systematically being purchased by foreign governments.

The white anting of the Australian economy has been happening for more than 25 years. The horse has bolted.

The globalization of the Australian economy is almost complete. I think the Australian public is finally starting to awaken. We have been hood winked and at has to be revealed for what it is.

Don’t expect a return to tariffs and protectionism any time soon though.

Decided to see what the Left is saying, and the answer seems to be not much. Green Left Weekly is so busy saving the planet it really seems uninterested in what’s just happened in The Gong, aside from a puff piece on behalf of a candidate in the upcoming local elections.  A search of Socialist Alternative came up with very little, aside from a memory lane job some three years back.

"If it’s anything like Port Kembla…I’d sooner stay away. Men waiting round the steelworks, so that when a chap is killed they could get his job."

This is how a character in Kylie Tennant’s novel The Battlers described conditions at the Port Kembla steelworks.

The Depression hit the Wollongong steelworks hard because the industry had already been in a slump since 1925. The conditions destroyed the limited gains in union organisation at Australian Iron and Steel (AIS) that the Federated Ironworkers Association (FIA) had made since the company’s move to Port Kembla in 1927.

There were huge barriers to union organisation at the plant, even before the onset of the Depression. There was enormous competition for jobs as men flowed in from Sydney and other areas.

Historians Robert Murray and Kate White describe how one shantytown above the steelworks "became an emergency camp where AI&S could get extra labour in a hurry. Each morning the unemployed would gather on the hill and an AI&S manager would select half a dozen or so men from the crowd waiting there like cattle being culled for market." By the late 1930s there were queues of as many as 700 waiting daily for work.

Unemployment and underemployment reached staggering proportions. In Wollongong one breadwinner in five declared no income for 1933. Shantytowns sprang up as a housing shortage quickly developed in the new town. Disease and illness were rife; in 1928 alone there were seven outbreaks of typhoid fever…

And that is certainly worth remembering. Unionism does have a history that ought never be forgotten and an ongoing relevance despite current attitudes.

Trouble is, for all the good they may have done, the hard Left seems to have been almost totally impotent in the face of developments in the past thirty years, Port Kembla today merely being the cherry on top.  I recall my old Communist mate Ray Southall ruefully referring to King Canute and the tide – and that was back in 1985!

Kudos too to John Quiggin for his Herald piece on the outrageous panic and lies surrounding the carbon tax. Future generations will wonder at how so piddling a thing attracted such wrath, but even more seriously may well curse us all for our apathy and inability to act more decisively on climate change.

The people of NSW have been treated to alternative descriptions of the impact of the Gillard government’s proposed carbon price package.

The first, prepared by the Commonwealth Treasury, showed very modest impacts on prices, wages and employment, most of which would be fully offset by the various compensation and adjustment mechanisms included in the package.

The second, attributed to the NSW Treasury, showed a very different picture. According to the Premier, Barry O’Farrell, and the Treasurer, Mike Baird, the carbon price would be a ”disaster”, which would ”tear the heart out of many industries” and ”savagely hit” regions such as the Hunter and Illawarra. Households would face electricity prices being ”forced up” by ”up to” $498 a year.

On the face of it, the Commonwealth and NSW Treasuries seem to have very different economic models, producing sharply different results. But a closer look reveals a different, and more surprising, story. The NSW Treasury report was based on work by a consulting firm, Frontier Economics, who say they used the same model as the Commonwealth, with almost identical inputs. As a result Frontier concludes, ”At an aggregate level, the modelling results in this report are broadly consistent with the Commonwealth Treasury modelling.”

How can this be? The answer is that the NSW government engaged in an exercise in misleading advertising that would make even the most shonky of infomercial vendors blush…

That’s an absolute MUST READ! 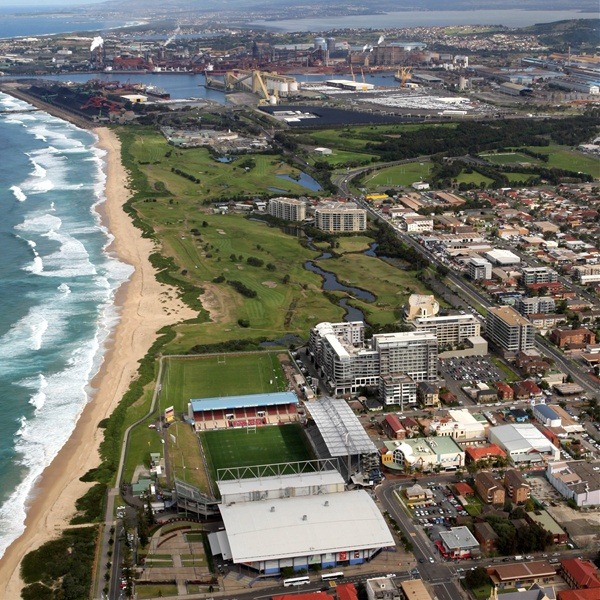 Foreground is the Entertainment Centre and behind that the stadium. On the corner to the right of the stadium is the Steelers Club.