… but it has been spring for the last couple of weeks, whatever the calendar says. And people liked yesterday’s Shakespeare sonnet, so I thought – why not?

Views from or at The Bates Motel.

Such a good title! A student of secondary teaching at Melbourne University has just started an edublog with that name.

No matter how fancy or whizz-bang our teaching presentations or animations of enzymes are, if we can’t get the kids listening and engaged we may as well try can-can dancing up and down the classroom with sparklers in our hair.

I am currently teaching two rather rowdy classes in Year 8 and Year 9, and have been learning the fundamental lesson that no matter what wonderful things you have planned to teach, you can’t actually teach them if you can’t effectively manage classroom dynamics. As my Year 7s and Year 11s last semester were much more manageable, this is my first real test of my behaviour management techniques, and it’s a bit of a learning curve.

Kristy’s first post led me to Teaching the iGeneration by Larry Rosen.

Studying generational similarities and differences can be tricky; no individual completely fits the profile of a particular generation. But research suggests that the majority of people born between a rough set of dates actually do share many characteristics (see Strauss & Howe, 1991).

Those born between about 1925 and 1946 are often called the Traditional or Silent generation. Growing up through the Great Depression, World War II, and the Cold War, they are characterized by a belief in common goals and respect for authority. The Baby Boomer generation, born between 1946 and 1964, tends to be optimistic, idealistic, and communicative and to value education and consumer goods. The next generation, born between 1965 and 1979, were defined by Douglas Coupland (1991) as Generation X in his book of the same name; the label X signifies that, compared with the Baby Boomers, Gen Xers are not as easily categorized.

With the 1980s and the birth of the World Wide Web, the power of cyberspace came to the masses and a new generation of web surfers, very different from their predecessors, was born. The most common label for this generation is Generation Y, simply meaning the generation after X. Some people stretch this generation past 1999 and refer to its members as Millennials. To me, these names are an insult to our first true cybergeneration. This generation should not be defined by the next letter in the alphabet or by the turn of the century. I believe that Don Tapscott’s (1999) term—the Net Generation—better reflects the impact of the Internet on the lives of its members.

On the basis of our research with thousands of teenagers and their parents, my colleagues and I have identified a separate generation, born in the 1990s and beyond, which we label the iGeneration. The irepresents both the types of digital technologies popular with children and adolescents (iPhone, iPod, Wii, iTunes, and so on) and the highly individualized activities that these technologies make possible. Children and youth in this new generation are defined by their technology and media use, their love of electronic communication, and their need to multitask.

Parenthetically, we are just starting to examine a separate minigeneration of kids like Mikey and Brittani, who not only are facile with individualized mobile technologies, but also have the expectation that if they conceive of something, they should be able to make it happen. If an app doesn’t exist for something they want to do on a smartphone, they just assume that nobody has created it yet and that it should be a piece of cake to do so. All in all, a fascinating minigeneration.

Good stuff, but one can’t help wondering at the odd parochialism in such things. All I have to do to see that is talk to M who was born in Shanghai in 1962!

In yesterday’s Sydney Morning Herald was an article about Birrong Girls High.

Students using blogs to express their creativity are coming out of their shells, writes Melissa Lahoud.

Speaking out in class can be daunting for some but high among the benefits of blogging in schools is the platform it provides for shy students to come out of their shells and express their thoughts more freely.

Birrong Girls High School in south-western Sydney is one school taking to blogging in a big way and Victor Davidson, a teacher and librarian, has developed hundreds of online learning spaces for his students.

”Some of our brightest and most articulate students, who often shy away from face-to-face conversations, have developed an active and dynamic presence online,” Davidson says.

Student Kristine King, 13, uses the blog to channel her creativity when writing stories and her confidence has surged since reading the positive responses…

Good work there! I did wonder how it meshes with what Thomas is doing – see Edublogging and I–with an aside on classroom management‘.

An experiment with PhotoScape and a view through my window here at The Bates Motel yesterday afternoon. 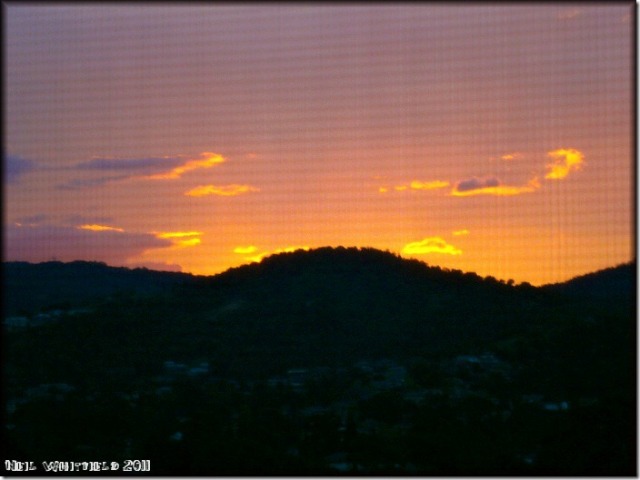 Sitemeter shows this month on the Floating Life sites shaping as the best of the last twelve months. Already it’s the best in terms of page views, with 12,915. Part of this is continuing Australia’s Got Talent interest, but the chief reason seems to be Surry Hills and Darlinghurst in 30s and 40s, and this post from Floating Life (14 January 2008) which I now duly repost!

Back when I was 16-19 years old one of my contemporaries at Sydney University, an acquaintance I would sometimes walk from Redfern with, was, though I didn’t know it, the nephew of Tilly Devine. That, in Darlinghurst/Surry Hills terms, is a bit like saying “the nephew of Al Capone” — there were similarities, especially in the idea of prohibition involved which, though not as radical in Sydney, did generate “sly grog shops” and a bigger inner city drug trade than most of us now realise; otherwise you’d have to say our female Capones were a touch less sinister. Tilly Devine and her Surry Hills rival Kate Leigh dominated inner Sydney life in the days when it had this common name: 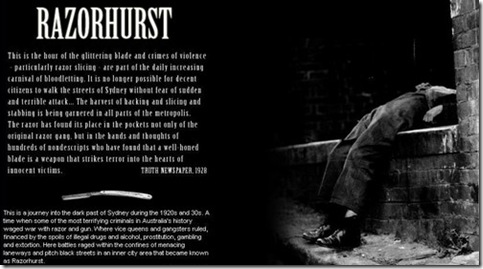 I just read about the connection between my fellow student and Tilly Devine in Larry Writer’s Razor (Pan Macmillan 2001) which I have just borrowed from Surry Hills Library. The student is now a very respectable, possibly retired, historian.

You may read a little more about those exciting times here:

From 1927-1930, Darlinghurst, Sydney was the scene of violent gang warfare. Two of the toughest gangsters on the scene at the time were Kate Leigh and Tilly Devine, whose battle to become the Queen of the Underworld fuelled the razor gang wars of Darlinghurst through their most violent years.

GUY NOBLE: In 1916, in the Sydney suburb of Liverpool, 5,000 troops of the Australian Light Brigade went for a riotous pub crawl that only ended three days and 50km later here in East Sydney.
The citizens of the time were so appalled by what had taken place that the government was forced to take action. It introduced six o’clock closing, which had an enormous impact on Sydneysiders for decades afterwards. This created an opportunity for two women with a criminal sense of enterprise. And the story of their feud is notorious in the history of this town.
VOICE-OVER: The Sydney suburb of Darlinghurst went under a different name in the Depression years. In local slang, it was ‘Razorhurst’. A place where razor gangs ruled with glistening blades and one of the great girl fights of Australian history played itself out in violent blows. The feud of crime queens Kate Leigh and Tilly Devine was a marriage of hatred. Till death do us part was one of its vows.
LANCE HOBAN, MBE, RETIRED NSW POLICE INSPECTOR: They were rivals in the world of crime. Kate was always very jealous of being known as the queen of the underworld. Tilly was always the queen of the bordellos. But they were always rivals to see who had attained the greatest notoriety.
LARRY WRITER, AUTHOR OF ‘RAZOR’: Kate and Tilly really became rivals when the Razor Gang wars broke out. There had always been gangs on the streets. But in 1927, we had the pistol licensing laws came in, which called for very heavy jail terms for anyone caught with a concealed weapon. So the crooks, instead of carrying pistols, armed themselves with razors. The other benefit of a razor was that it was a terrifying instrument in that people usually gave up their money if they were confronted by a glistening blade, gleaning off the lamplight amid a Kings Cross lane…

I think I’ll enjoy the book. By the way, Miranda Devine is apparently called “Tilly” by some, but as far as I know is no relation.

That is a documentary, not the current TV series, which I haven’t been following.

I have recalled a few more posts I have done related to this.

Surry Hills 24: just a walk around the block 2

You can’t walk this block without encountering the spirit of Kate Leigh, one-time Queen of The Hills.

This is where she ended her days: 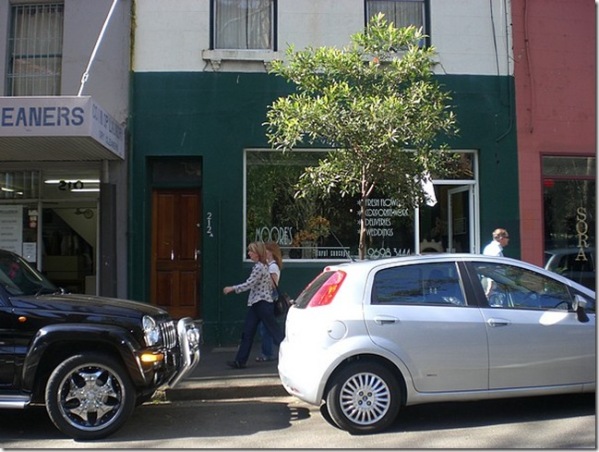 And here, I think, is the balcony from which she distributed largesse to the children of Surry Hills at Christmas, when at the height of her fame. 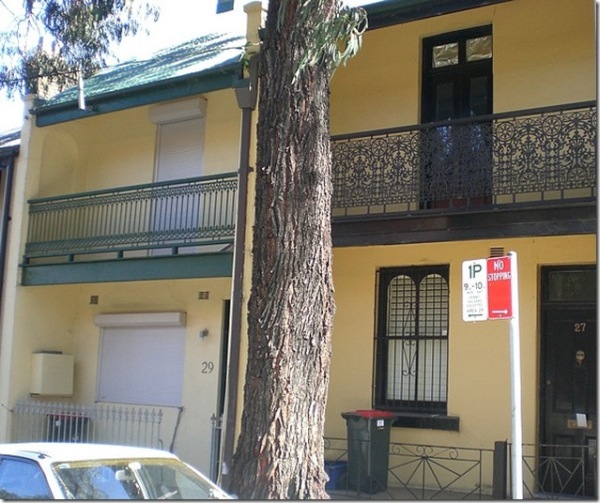 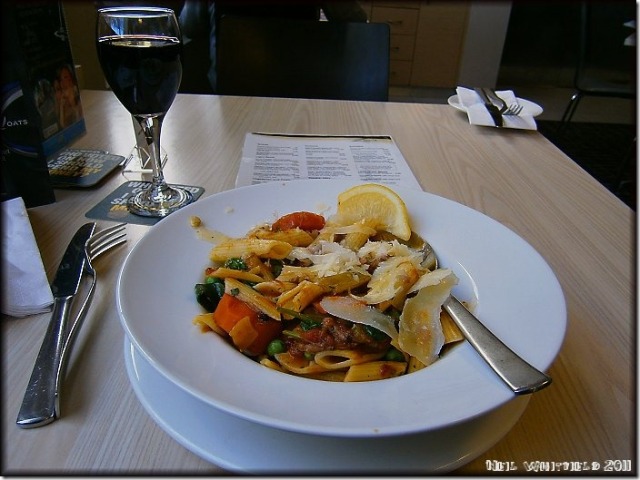 Then wandered around Crown Street Mall. Let’s hope the “Mall Sceptics” lose at next Saturday’s election! It’s a treasure, that’s what it is…

And the templates for the two active blogs – gone back to basics.