I am not an activist. I can count on one hand the demos I have attended in the past two decades, and on two the demos I have ever attended. The romance of the barricades has not been my style and the cynic in me has often written off such activities as mere drama, even self-dramatisation and a way of imagining one is not impotent after all. I don’t think I have ever carried a placard.

But I have worn one.

When the Reverend Fred Nile and his fundamentalists march into Oxford Street set on a bit of cleansing I am out there with the crowd. I wear my Mardi Gras T-shirt with additions:

‘Gone where fierce indignation
can lacerate his heart no more.’

Fred has his thousand, harmless-looking folk pushing strollers, mingled love and fear on their faces as they march up Oxford Street.

And my voice is the voice of three, a trinity of love grief and anger, and in me sing Rob and Mark and I:

And I see his face, a touch side-on, the slightly crooked nose and shy smile, eyes so often fearful, the bursts of anger, the incredible gentleness and my tears choke my singing and a gay man hugs me and says So you’re human after all…

…and the question of racism

But I can admire activists as well, especially those whose activism is rather more than screaming on street corners or playing tag with police. It is something I am ambivalent about. A matter of style perhaps, because I sure have been known to protest in my way. Last year my journalism was one such way. 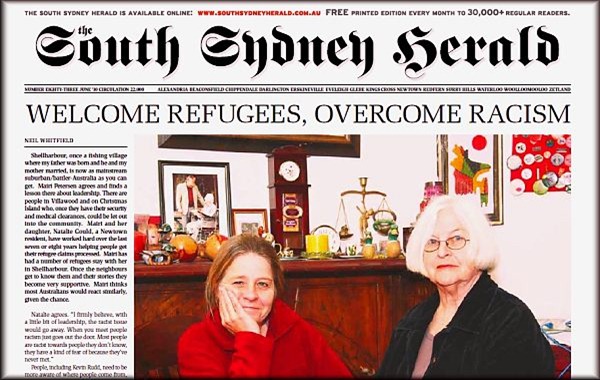 My story, but not my headline.

Shellharbour, once a fishing village where my father was born and he and my mother married, is now as mainstream suburban/battler-Australia as you can get. Mairi Petersen agrees and finds a lesson there about leadership. There are people in Villawood and on Christmas Island who, once they have their security and medical clearances, could be let out into the community. Mairi and her daughter, Natalie Gould, a Newtown resident, have worked hard over the last seven or eight years helping people get their refugee claims processed. Mairi has had a number of refugees stay with her in Shellharbour. Once the neighbours get to know them and their stories they become very supportive. Mairi thinks most Australians would react similarly, given the chance.

Natalie agrees. “I firmly believe, with a little bit of leadership, the racist issue would go away. When you meet people racism just goes out the door. Most people are racist towards people they don’t know, they have a kind of fear of because they’ve never met.”…

You can see what I was driving at and it doesn’t quite match the headline, does it?

Yet I do believe that racism. xenophobia or fear much more visceral and general do colour the attitudes of many people when the topic of asylum seekers comes up. I think it is clear that questions like these are founded in such fears. 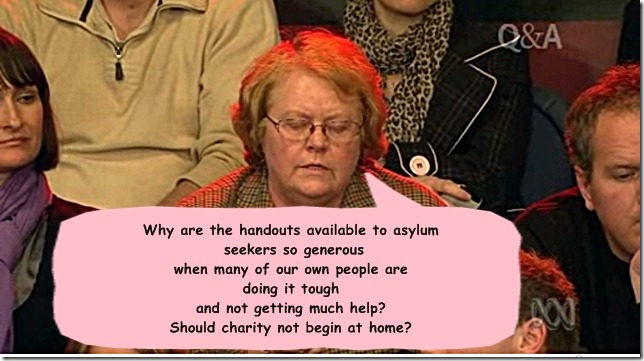 Both questions were answered credibly and with a pleasing degree of bipartisanship. I commend also the quiz on SBS’s Go Back to Where You Came From where such issues are addressed.

The point I would make is that screaming RACIST SCUM!!! in the faces of such people may make the screamer feel good or powerful, but achieves nothing for the cause.

I encountered such things in my work around the same time as Tampa and the Pacific Solution were occupying our minds. See For the record: the great SBHS race debate of 2002. This was in fact exceedingly unpleasant.

The issues raised at that time included:

1. Is the selective schools test a fair and reliable instrument for choosing entrants for selective schools? This site does not deal with this. Arguments here range from whether there should even be selective schools to various ideas about how students might be selected for them. The March 2002 High Bulletin has an account by Dr Jaggar of current selection procedures.

2. Are concerns about the current population of Sydney Boys High (and other selective schools) motivated in part by xenophobia? Gerard Noonan seems to think so. There is no doubt an element of this in the discussion, and many in the “Asian” community and beyond sense this to be the case. There are certainly matters of cross-cultural communication and understanding to be addressed here, and this site is largely concerned with these matters. One has to ask, would the concerns of some be so sharp if the change in the population of selective schools was not so “visible”?

3. Is there some policy of positive discrimination in favour of certain groups? The answer to this is a categorical “No”. The only area some may perceive this way is the option to avoid the General Abilities Test in the Selective Schools Test where a student has been speaking English for a very short time. As of 2001, no student entering SBHS from the Selective Schools Test had taken that option, so it is a non-issue in this school.

4. Is Sydney Boys High in the same position as other selective schools? This is the issue the Old Boys have been most concerned with, and the answer has to be a qualified “No”. Our participation in the AAGPS does make a significant difference. Strategies to address this include making our many feeder schools aware of the unique ethos of SBHS, reaching out to the various family communities to explain the value of the ethos of SBHS and encourage participation, and considering varying the method of entry to allow some people who have passed the Selective Schools Test but may have other qualities to offer the school a chance to get in. The Committee headed by Mr Robert Outterside has been discussing this question and there is nothing xenophobic about such discussion. Here the media have treated the school rather shabbily, giving rise to unnecessary alarm.

I recently had the chance to discuss these matters with a Chinese-born and Chinese-educated member of the class of 2001. In Shanghai the top selective schools choose 5 out of 6 of their classes on academics alone; the remaining class is chosen on that plus what they may contribute to sports, music, or some other field–to give the school a healthy mix of talent. Coaching is practically unknown in China.

5. How does one explain the change in the population of Sydney Boys High and other selective schools in recent years? This site proposes some answers along cultural and demographic lines in order to open up the debate beyond the somewhat one-dimensional explanations one sometimes hears. It does not provide comprehensive answers but seeks to refute those whose answers do seem to be tinged with nostalgia or xenophobia.

This site (on all its pages) accepts and celebrates cultural diversity in line with Departmental policy on teaching and learning in multicultural schools. It encourages all the members of our diverse community to work together in harmony for the good of all our students. It attempts to promote inter-cultural understanding and communication. It is opposed to any “us” and “them” orientation…

About the only time I have ever been named in the national press!

On the other hand I have no doubt the Howard government was playing dog whistle politics on the boat people issue and politicians still are doing this.

The Illiberal Information Control of the Howard Thought Police

That was one element in the documentary and at the time of the events it describes which really resonates with me. I found the Howard years dreadful in their relentless attempts to channel thinking one way – and have never understood those who think Howard “freed up discussion” after the horrid Keating. No way. We just gained a new set of bullies.

Yes, I know, by the standards of many a tinpot dictatorship we were still a bastion of free thought, but thought that was too free was not Howard’s cup of cha.

More alarming this week was the ABC’s failure to give a decent explanation for refusing to sell news clips of politicians to a documentary maker.
What were the sensitive news clips the ABC wouldn’t let her buy? This for instance:

We will decide who comes to this country and the circumstances in which they come.
-ABC, 28 October 2001…

More disturbingly a number of children have been thrown overboard, again with the intention of putting us under duress.
ABC, 7 October 2001…

And what sort of film was documentary maker Judy Rymer making?

Punished not Protected is an educational documentary series in four parts (on tape) featuring the views of leading Australians and concerned citizens on the effects of government policy on asylum seekers and temporary protection visa holders.
-Ronin Films web site…

Faced with this bizarre condition and running out of time, Rymer decided to take the footage from a low quality viewing tape the ABC had already lent her.
The result was pretty rough with ugly time code marking the forbidden grabs.

Riz Wakil: They kicked us out from our own home.
John Howard: We will always take our fair share of people who are found to be genuine refugees. What we will not take are people who seek to enter this country illegally.
Malcolm Fraser: Asylum seekers, refugees, often travel by unorthodox means.
Punished, not Protected. Ronin Films, 2004 …

Not nearly as unorthodox as the ABC’s plan to let politicians veto the use of news footage in documentaries.
Robyn Watts tried to convince Media Watch that unless Howard, Ruddock, Reith and Vanstone gave the OK before footage was sold to Judy Rymer –

…the ABC could be exposed to the risk of claims under the Trade Practices Act or pursuant to the tort of Passing Off.
Robyn Watts fax to Media Watch, 23 July 2004
-Read letter…

So much more to say!

Next post we’ll try to get our head around such numbers and the implications for our debate. QandA addressed this directly and indirectly.