This entry is double-posted and marks the end of the photoblog for the foreseeable future: photos will appear regularly here. I have been thinking of doing this for some time now.

Here in Wollongong we continue to feel the effects of La Niña and, apparently, a negative Indian Ocean Dipole (IOD) event in the Indian Ocean. You may read all about this on several pages from the Bureau of Meteorology: ENSO forecasts from POAMA; Moderate to strong La Niña event in Pacific; Models predict La Niña event will persist into at least early 2011.

La Niña periods are generally associated with above normal rainfall during the second half of the year across large parts of Australia, most notably eastern and northern regions. Night time temperatures are historically warmer than average and Tropical Cyclone occurrence for northern Australia is typically higher than normal during the cyclone season (November-April).

A negative Indian Ocean Dipole (IOD) event in the Indian Ocean also continues. Negative IOD events are typically associated with above average rainfall over large areas of southern Australia during spring. IOD events usually decay in the months of November and December with the onset of the Australian monsoon. A recent rise in the IOD index and southwards movement of the monsoon trough indicates the event may already be weakening.

So the area around The Bates Motel continues to look like this: 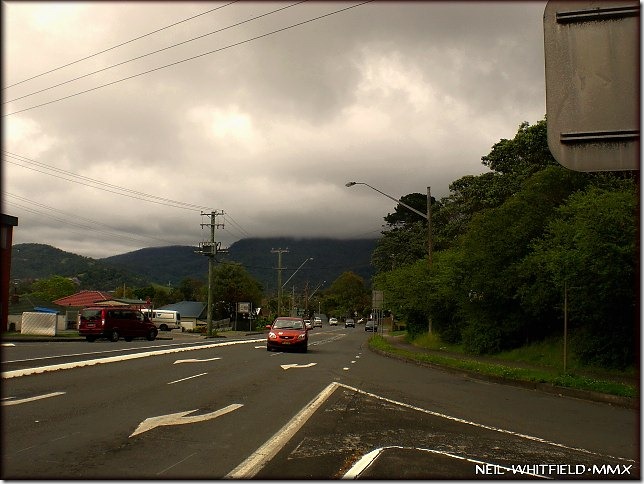 Mind you, you can get nice effects happening at times:

Quite a contrast to this time last year!

That’s in Sydney of course, but I’m sure The Gong was similar.

So does this affect the reality of global warming? Hardly. Lower than normal temps in one part of the world in one season don’t affect the overall climate trend.

Climate change is a defining issue for our time. The geological record contains abundant evidence of the ways in which Earth’s climate has changed in the past. That evidence is highly relevant to understanding how it may change in the future. The Council of the Society is issuing this statement as part of the Society’s work “to promote all forms of education, awareness and understanding of the Earth and their practical applications for the benefit of the public globally”. The statement is intended for non-specialists and Fellows of the Society. It is based on analysis of geological evidence, and not on analysis of recent temperature or satellite data, or climate model projections. It contains references to support key statements, indicated by superscript numbers, and a reading list for those who wish to explore the subject further…

While these past climatic changes can be related to geological events, it is not possible to relate the Earth’s warming since 1970 to anything recognisable as having a geological cause (such as volcanic activity, continental displacement, or changes in the energy received from the sun)43. This recent warming is accompanied by an increase in CO2 and a decrease in Arctic sea ice, both of which – based on physical theory and geological analogues – would be expected to warm the climate44. Various lines of evidence, reviewed by the Intergovernmental Panel on Climate Change clearly show that a large part of the modern increase in CO2 is the result of burning fossil fuels, with some contribution from cement manufacture and some from deforestation44. In total, human activities have emitted over 500 billion tonnes of carbon (hence over 1850 billion tons of CO2) to the atmosphere since around 1750, some 65% of that being from the burning of fossil fuels18,45,46,47,48. Some of the carbon input to the atmosphere comes from volcanoes49,50, but carbon from that source is equivalent to only about 1% of what human activities add annually and is not contributing to a net increase.

In the coming centuries, continued emissions of carbon from burning oil, gas and coal at close to or higher than today’s levels, and from related human activities, could increase the total to close to the amounts added during the 55 million year warming event – some 1500 to 2000 billion tonnes. Further contributions from ‘natural’ sources (wetlands, tundra, methane hydrates, etc.) may come as the Earth warms22. The geological evidence from the 55 million year event and from earlier warming episodes suggests that such an addition is likely to raise average global temperatures by at least 5-6ºC, and possibly more, and that recovery of the Earth’s climate in the absence of any mitigation measures could take 100,000 years or more. Numerical models of the climate system support such an interpretation44. In the light of the evidence presented here it is reasonable to conclude that emitting further large amounts of CO2 into the atmosphere over time is likely to be unwise, uncomfortable though that fact may be.