Perhaps near where Sirdan and I were on our Wollongong/Kiama reconnaissance. 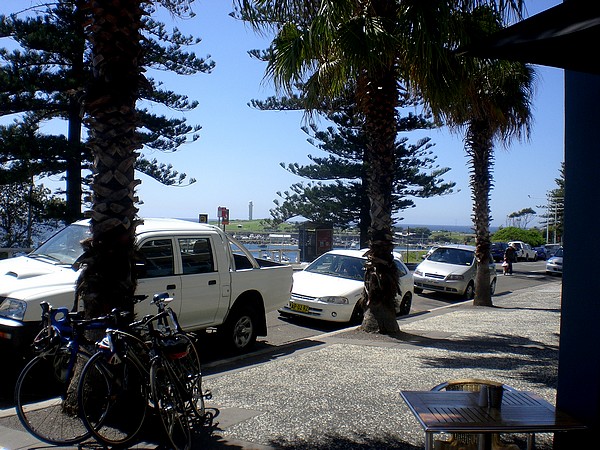 Looking down Surf Road towards the light house

Yes, a photo I hadn’t used yet.

Forty years to the minute, almost, since I moved down to Mrs Cuell’s half house of fond memory and began my ten years in the Illawarra. (Sometimes I am sorry I left! But then lots of good things wouldn’t have happened otherwise, I guess.)

Found another old post which testifies to the brilliance of one recent graduate from the selective school down there.

From what I can see Mr R will be hard pressed to beat the experience I gather he has had at CPAHS; sometimes a new school can have its time of readjustment. There’s a sense in which you have to reestablish yourself each time you take up a new appointment.

I have to admit though that Mr R is way ahead of where I was in so many ways, when I think back to January 1970. I will certainly be eager to hear of his progress.

I have just added this to my widgets here, having forgotten to do so. It indicates 11 people on my sites right now.

There’s a map which also shows where it’s night and day at the moment.

Bloggers must realise it isn't just their mates who read their posts.

This entry from three years back is proving popular at the moment. So here it is again. Go to the original to see some comments. 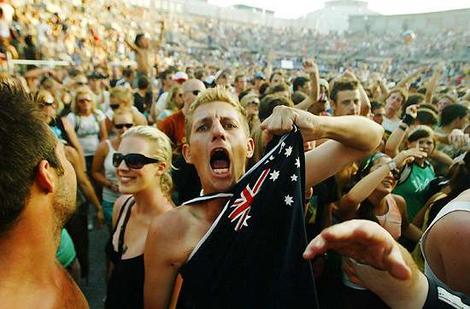 Proud Australian … patriotic displays – this one was at last year’s Big Day Out – cannot and should not be stopped, say politicians. Photo: James Brickwood, Sydney Morning Herald.

Click that guy in the Union Jack and you will be able to read this morning’s Sydney Morning Herald on the subject. The Daily Telegraph is in its element on this, as you may see on the left. Oh and what is the fuss about? The alleged banning of the Australian flag at the Sydney Big Day Out rock concert this year.

It is worth visiting the Big Day Out site:

Clarification on the Flag Issue

The Big Day Out would like to offer the following to clarify its position on “flag banning” at the Sydney show.

Contrary to the reports in the media, it was never our intention to disrespect the symbolism of the Australian or any other flag.

We are not banning the Australian flag but are simply discouraging its use for anti-social purposes at the Big Day Out.

We state unequivocally that flags will not be banned at any Australian Big Day Out show in the foreseeable future.

In recent times, there has been an increased incidence of flags brandished aggressively and this has led to increased tension. Our only intention in discouraging this activity at the Big Day Out is to ensure that our patrons are not subjected to this aggressive behaviour.

With all this in mind and the aim to create a happy, peaceful MUSICAL event, organisers would like to request that fans please leave their flags at home.

The Big Day Out is not an Australia Day event, but a music festival showcasing music artists from around the world and aspires to unify people through music.

If you look at the Australian flag protocols you will see there “the flag should not fall or lie on the ground or be used as a cover” (except for coffins) and that “the flag should be used in a dignified manner and reproduced completely and accurately.” It strikes me we are in danger of forgetting those. It is my view that the comparatively recent fashion of displaying the flag for all sorts of inappropriate reasons and in inappropriate ways has led to a cheapening, even sometimes a tainting, of its symbolism, which may well make me more conservative on this occasion than John Howard! 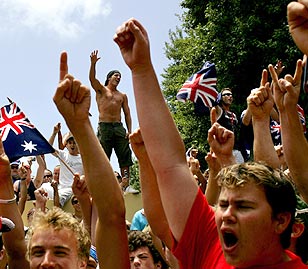 At the time of the Cronulla riots I wrote rather provocatively: “My father and uncles fought the Japs and the Nazis so that mobs wrapped in national flags would not take over the streets, actually… Think about it.” The day before I had written:

…Look at those raised arms and imagine swastika flags… Yes, the Aussies really worried me that day, and I am sure my father would have seen the imagery with considerable disquiet. He would also recall the New Guard of the 1930s, for whom he had no respect whatsoever. This is not patriotism: this is mindless jingoism and tribalism. Nor is it what the bulk of Cronulla-ites had in mind when that day began. Unfortunately, neo-Nazis and sheer bogans from as far away as Penrith and Campbelltown (not a rumour — I have read their blogs) joined in the general anarchy. I have no more time for them than I have for the hoons who have been wrecking enjoyment at the beach, some of whom attacked those lifesavers. But that’s OK, isn’t it: “our” bogans attack ambos and attempt to kill innocent bystanders, no questions asked…

I wouldn’t have touched most of this crowd with a barge-pole personally, and THAT is a patriotic point of view in my opinion. I am the citizen of a country that is a bit more grown-up than the one some of these people seem to want.

Also provocative, but I was contemplating the picture on the right.

Anyway, I am a recovering pontificator now, aren’t I?

To return to the top picture. Look closely and you will see very few flags, in fact. I am sure too, whatever the protocols are that may be being breached, that the majority at the concert would have worn their flags without sinister intent. Nonetheless, it is a fair point to say that the Aussie flag is hijacked by some with less than good intent, and as one letter says in today’s Herald, “Flags belong on flagpoles, not on caps and T-shirts or draped around the shoulders of drunks.”

Bruce, now on WordPress, is quite fierce on the subject.

Even my favourite Right Wing Blogger (and I mean that seriously: his blog is great!) finds the whole flag fashion a “bit excessive”: See Excessive.